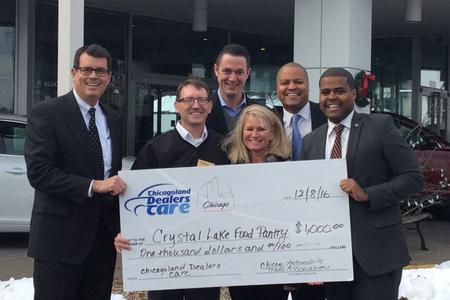 "Courtesy Buick-GMC is a perfect example of how car dealers are truly pillars of their communities," said CATA Chairman John Hennessy. "The Fregia family coordinated a food drive event surrounding the Thanksgiving holiday at their dealership that encouraged residents to donate food throughout the month of November. Then, on Thanksgiving morning, dealership staff volunteered to help organize the 70,000 pounds of food that came in through the drive. The CATA is happy to lend additional support to Courtesy Buick GMC's already amazing efforts."

"Without Courtesy Buick-GMC's support, both financially and via volunteer work, we wouldn't be able to run an event of this caliber," said Community Harvest Committee Chair Judy Pelinski. "It's an amazing feat - all of the food we bring in through Courtesy Buick-GMC's food drive and the primary Thanksgiving drive feeds local residents from November all the way through August. Our hope in five years is to raise the food total from 70,000 to 100,000 pounds."

Courtesy Buick-GMC Vice President Rik Fregia said the Community Harvest campaign is something he and his dealership employees believe in and can really get behind.

"The overall need for food is increasing and, according to Feeding America, 63 percent of America is a month away from needing to access a food pantry," said Community Harvest Committee Vice-Chair Bill Eich. "The Crystal Lake Food Pantry serves more than 1,500 people throughout the community and, often times, it's people you'd never even suspect are hungry."

Shortly, the Crystal Lake Food Pantry and Community Harvest campaign will move into a brand-new facility that is about 10 times the size of their current space. As the food drive continues to grow, campaign organizers say it becomes extremely important to expand the warehouse where the food is stored.

Courtesy Buick GMC has plans to support the cause as long as it services the community.

The Chicago Automobile Trade Association has been a longtime supporter of local nonprofit organizations. Since its inception in 2008, the Chicagoland Dealers Care program has donated nearly $95,000 to local charitable organizations supported by new-car dealers. Additionally, since 1992, the association has raised $44 million for significant Chicago charities during the annual First Look for Charity black-tie event, held the evening before the Chicago Auto Show opens to the public.