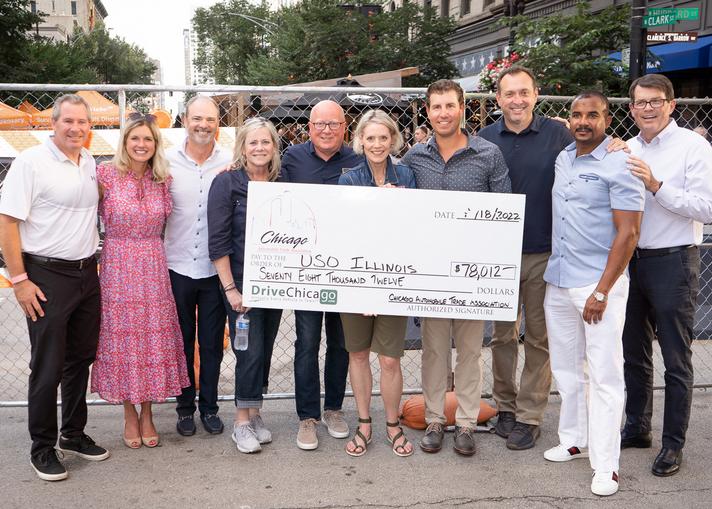 More Than 60 Chicagoland New-Car Dealers Raise $77,000 through USO Barbecue for the Troops Fundraisers

CHICAGO (Aug. 22, 2022) - For the ninth year, the Chicago Automobile Trade Association (CATA), the Chicago-area's new-car dealer association, partnered with the USO Illinois to host Barbecue for the Troops fundraisers. This summer, 63 local new-car dealerships fired up their grills to host community Barbecue for the Troops events featuring everything from patriotic ceremonies, classic car shows, live music, games for kids of all ages and, of course, barbecues. The dealerships rallied their communities once again, bringing in more than $81,000 for local military and their families.

"CATA dealerships are committed to giving back to their communities, and the USO Barbecue for the Troops initiative is one great example of dealers helping people in need - right in our own backyards!" said CATA Chairman JC Phelan. "This year is especially wonderful because of the $1 million fundraising milestone we achieved and I am so proud to present this check to USO Illinois on behalf of all participating dealers."

"We are overwhelmed with the amount of support we have seen this year from our partners at the Chicago Automobile Trade Association and the local new-car dealerships," said USO Illinois Executive Director, Christopher Schmidt. "What started as a grassroots effort has now turned into more than $1 million in support for our local service members and their families."

In addition to the community fundraisers, awareness spread via social media. The CATA and USO Illinois ran a #BBQ4Troops social media contest where people could nominate individuals they deem worthy of winning the Ultimate Backyard Barbecue. Entries poured in throughout the month of July; wives nominated husbands who served overseas, parents nominated children who are active duty military and friends nominated deserving friends and neighbors.

Ultimately, the CATA and USO Illinois selected Tim Kilpatrick, who was nominated by his wife. In her submission, she noted, "Tim is a Marine Corp Veteran and Veteran of Foreign War who is a devoted father and husband. He is an extremely hard worker and puts 100% into everything he does." This summer, the Kilpatrick's will enjoy the Ultimate Backyard Barbecue for 20 family members and friends, complete with mouth-watering barbecue fare from Mission BBQ. The runner-up, Michael Duzenski, nominated by Michelle White, honorably served in the Navy for 20 years. Michael will receive a summer-themed basket from the USO including a signed Bears football, USO swag and a bags yard game set.

To celebrate another successful program, CATA board members joined the USO Illinois onstage at Clark After Dark last week to present their check for $77,100. Clark After Dark is the USO's annual summer street festival fundraiser, held in the heart of Chicago's River North district.

"This program could not have been a success without the incredible support of our media partners," said Phelan.  "Many thanks are due to all of our partners in TV, radio and outdoor advertising media who helped us promote this worthwhile program.  And a special thanks to ABC 7 for producing the TV spot that aired throughout the market."

The CATA and USO Illinois are already planning for next year. The USO Barbecue for the Troops fundraising events are set to take place at local new-car dealerships on Sat., July 15, 2023.