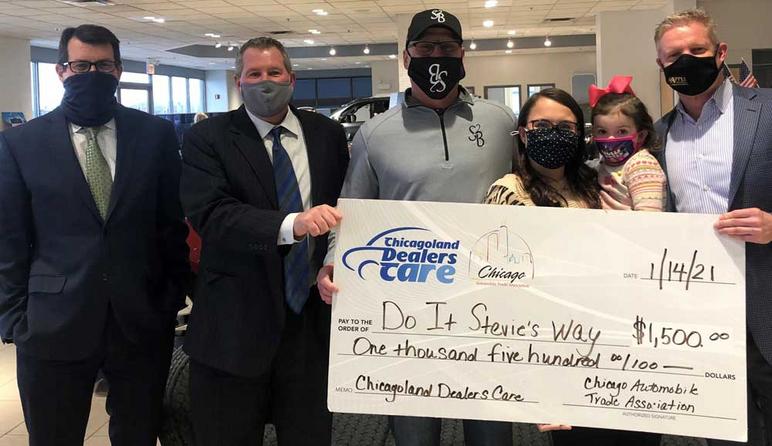 CHICAGO (Jan. 19, 2021) - The Chicago Automobile Trade Association (CATA), Chicagoland's new-car dealer association, recently donated $1,500 to the Do It Stevie's Way Foundation. The donation came via the CATA's Chicagoland Dealers Care program in conjunction with a $4,000 donation by Tinley Park-based Apple Chevrolet. Through Chicagoland Dealers Care, the CATA matches up to $1,500 of a member dealer's donation to local charitable organizations.

The Do It Stevie's Way Foundation was started in 2010 by Mark and Karen Bajenski, Stevie's parents, after their son tragically died at age 17. The foundation identifies and directs its resources by teaching young men and women to do things the right way-Stevie's Way-within the classroom, communities, families and on the athletic fields. Based on these values, Do It Stevie's Way rewards numerous scholarships to kids of all ages on a yearly basis. The foundation also supports a variety of important initiatives ranging from suicide awareness to supporting other families who have lost children.

"Our motto is 'Be a team player and make a difference every day,' just the way Stevie did," said Mark Bajenski. "The foundation doesn't support just one specific mission. Instead, it promotes helping children lead their best lives so then, hopefully one day, those children will also become team players and help future generations once they're able."

"Do It Stevie's Way has given me a new purpose in life, which is to give back and teach important lessons," Bajenski concluded.

Apple Chevrolet Dealer Principal John Alfirevich has helped support and champion Do It Stevie's Way since the foundation was started 11 years ago.

"This foundation is unique in that is supports a variety of missions that represent Stevie's character; it doesn't just focus on one effort," said Alfirevich. "Giving is receiving in my world, and this cause is very near and dear to my heart."

Because dealerships are closely weaved into the fabric of their local communities, many individuals and organizations turn to them in a time of need. The CATA has been a longtime supporter of local nonprofit organizations like the Do It Stevie's Way Foundation. Since its inception in 2008, the grassroots Chicagoland Dealers Care program has donated more than $120,000 to local charitable organizations. Additionally, since 1992, the association has raised more than $56 million for significant Chicago-area charities during the annual First Look for Charity black-tie event, traditionally held the evening before the Chicago Auto Show opens to the public.

"The CATA's Chicagoland Dealers Care program not only helps stretch our member's donation dollars for wonderful organizations like this foundation, but it also shines a spotlight on new-car dealers' positive impact within their communities," said CATA Chairman Kevin Keefe. "We applaud local dealers like Apple Chevrolet for their very generous contributions to their community and helping those in need."

For more details on the Chicagoland Dealers Care program, please visit www.ChicagolandDealersCare.com. To learn more about the Do It Stevie's Way Foundation, visit www.doitsteviesway219.com.