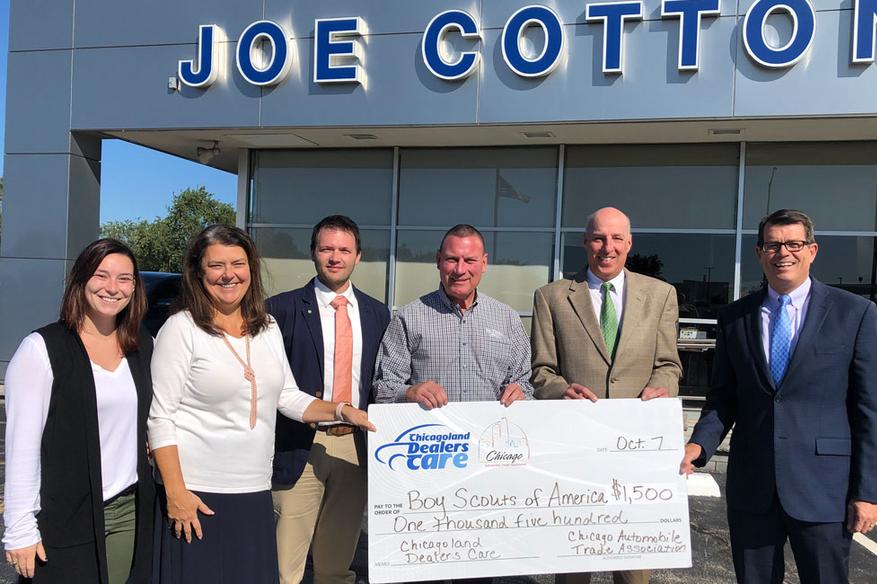 "The CATA's Chicagoland Dealers Care match program not only helps our member dealers' dollars stretch a little further for these charities, but it also helps to put a spotlight on new-car dealers' generosity and charitable work within the communities," said CATA President David Sloan. "Joe Cotton Ford is a prime example of a dealership that consistently spreads goodwill to those in need."

The main mission of the Boy Scouts of America is to prepare young people to make ethical and moral choices by instilling in them the values of the scout oath and law. Specifically, the Three Fires Council operates three districts across four counties locally, annually servicing 14,000 youth through its outdoor educational program. These programs primarily focus on developing leadership skills and community engagement.

"We believe that the outdoors is the perfect environment for a classroom, and we're able to multiply our efforts through partners like Joe Cotton Ford," said Zachary Knoch, Ottawa district director, Boy Scouts of America, Three Fires Council.

"Joe Cotton Ford has been a generous supporter of our efforts to engage youth in positive experiences that build them into better citizens of their communities, our nation and the world," continued Knoch.

Joe Cotton Ford Vice President and General Manager Tracy Conn initially became interested in the Three Fires Council as his son, Jason, started as a youth scout in the organization ten years ago. Just last year, Jason was named "Scout Master" of one of the two troops within the National Youth Leadership Training at Camp Big Timber - a powerful, week-long BSA program that centers around what a leader must be, must know and must do. Camp Big Timber recently underwent a major renovation, to which Jason and the entire Joe Cotton Ford dealership volunteered their time.

"It's that personal connection ... knowing firsthand what the Boy Scouts did for our son, we want to give back to the organization so that others are able to receive the same experience," said Tracy Conn.

The CATA has been a longtime supporter of local nonprofit organizations. Since its inception in 2008, the Chicagoland Dealers Care program has donated more than $100,000 to local charitable organizations supported by new-car dealers. Additionally, since 1992, the association has raised more than $53 million for significant Chicago-area charities during the annual First Look for Charity black-tie event, held the evening before the Chicago Auto Show opens to the public.