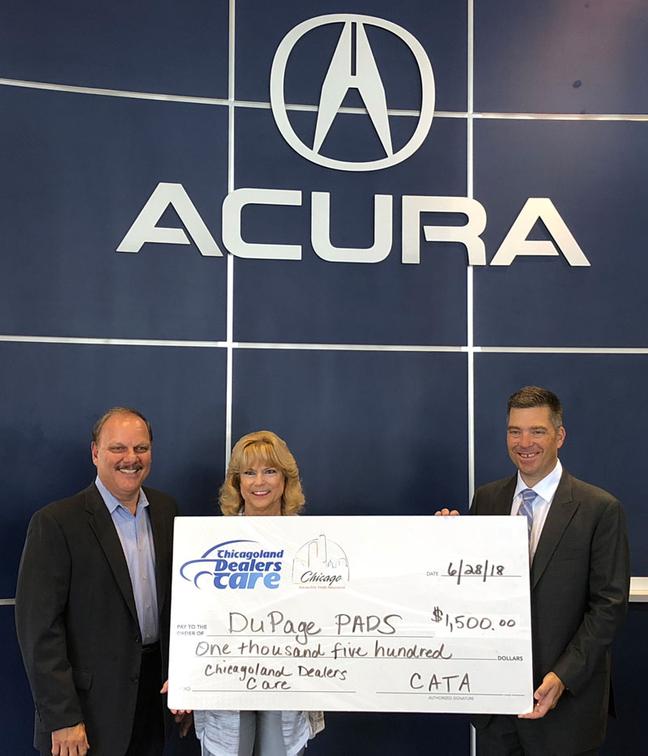 The CATA created the Chicagoland Dealers Care program in 2008 to build upon the charitable efforts of CATA's dealer members within their communities. Continental Acura of Naperville has been a supporter of DuPagePads for nearly a decade and dealer principal Joel Weinberger is personally involved with the charity, having recently completed a six-year term on their board, as well as spearheading an annual fundraising event called the "Drive for 95."

"Local dealers are where organizations and people turn when they need assistance, because they know they're the pillar of their communities," said Tony Guido, CATA chairman. "As chairman of the Chicago Automobile Trade Association, I'm fortunate to witness all of the goodwill put forth by dealer owners and employees."

Weinberger turned his passion for cars into the "Drive for 95 fundraiser," a four-hour karting event held at the Autobahn Country Club in Joliet where 15 teams compete to raise funds for the charity. The goal of the event was to raise $95,000, but this year's event - now in its eighth year - generated $127,000 for DuPagePads, totaling more than $800,000 since its inception.

"The 'Drive for 95' fundraiser began as 'Drive for 25' with the goal of raising $25,000; we have to keep raising the bar over the years!" said DuPagePads Vice President of Development Janelle Barcelona. "We're very fortunate to have someone like Joel [Weinberger] on our board and to have the ongoing support of his dealerships."

"It's a good feeling to know you're helping people right within your community," said Weinberger.

The CATA has been a longtime supporter of local non-profit organizations. Since its inception in 2008, the Chicagoland Dealers Care program has donated more than $100,000 to local charitable organizations supported by new-car dealers. Additionally, since 1992, the association has raised $50 million for significant Chicago-area charities during the annual First Look for Charity black-tie event, held the evening before the Chicago Auto Show opens to the public.