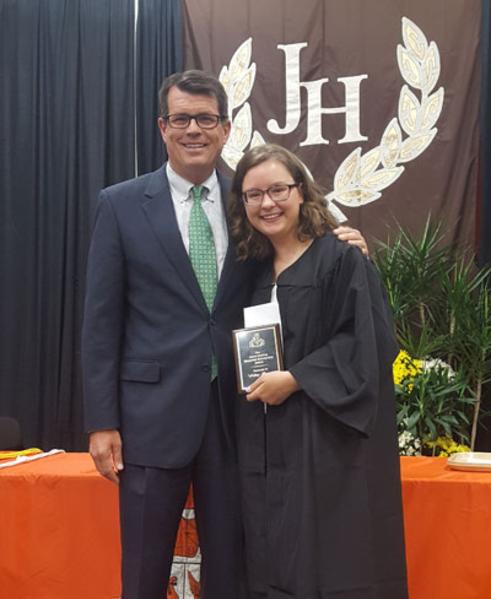 The CATA, producer of the Chicago Auto Show, worked closely alongside Cooling during the annual production of NBC's Chicago Auto Show TV special and developed a lasting relationship with her over the years. Cooling was the strong foundation to a successful partnership that led to multiple Emmy wins for the show. Although Cooling's official title at NBC was "Director of Special Events," she was most frequently referred to as the "heart and soul" of the station.

"Having a positive influence on others was a strong trait of Carol's, something shared by our recipient this year, Ashley Roscoe," said John Hersey High School Assistant Principal John Novak. "Ashley has been extremely involved with helping others through our Service Over Self Program. She served as a coordinator for the Veteran's Initiative Program and A Soldier's Journey Home, helping to raise money to build a home in Spring Grove, Illinois, for a local veteran suffering from post-traumatic stress disorder. Her desire to bring awareness to the plight of others in an effort to help better their circumstances has been a strong drive throughout her high school career. We are thankful that the Chicago Automobile Trade Association continues to honor a Hersey student in Carol's memory."

Roscoe plans to use the grant to help fund her college education. She will attend the University of Wisconsin-Whitewater this fall, where she will pursue a double major in Natural Resource Management and Criminology.

"With the help of this scholarship, my hope is that I can attend college to learn how to protect our state and national parks as I aspire to be a conservation officer or a park ranger," said Roscoe. "I am beyond blessed to have received the Spirit of Carol Cooling scholarship, and cannot express enough gratitude to the Chicagoland Automobile Trade Association. Thank you to all involved who chose me as the recipient of this award."

The CATA will fund the scholarship through 2024, and Hersey High School students will have the chance to apply again next year.

"Carol was not only a key liaison between the CATA and NBC Chicago, she also was a dear friend," said CATA Chairman John Hennessy. "We couldn't think of a better way to honor Carol and keep her legacy alive than by recognizing a young person with high hopes and dreams who also embodies Carol's characteristics."