"The CATA applauds Bredemann Lexus & Ford of Glenview for their support of St. Joseph Services, among other charities," said CATA Chairman Ray Scarpelli Jr. "This is a perfect example of the vital role that dealers play to help those in need - right within their local communities."

St. Joseph Services' mission is to serve and support families and individuals in need in the Humboldt Park and Austin neighborhoods of Chicago. Specifically, the charity works with program participants to strengthen and develop their skills in order to move from a position of poverty and assistance to one of economic, spiritual and social self-sufficiency. St. Joseph Services operates its own programs while also collaborating with other not-for-profits and local schools to provide innovative and accessible education, after school and year-round programs for community youth, adult education classes - such as citizenship and English as a second language - plus an open gym on Sundays.

"For more than 100 years, our family has been serving customers and giving back to the communities in which we sell and service vehicles," said Marty Bredemann, general manager of Bredemann Lexus in
Glenview. We have very high standards for customer service and we see these same standards used by the charities we support, as they try to help people overcome challenges through their inspiring work."

"St. Joseph Services is a remarkable organization; they use their resources extremely efficiently to serve those who need help the most," continued Bredemann. "There are so many success stories...people go through St. Joseph Services' programs and, over time, return to help others while serving as a role model for the young people currently enrolled in the program. It's truly amazing."

This year, the Bredemann family will hold the annual St. Joseph Services Fall Festival at its Lexus dealership the evening of Saturday, Nov. 11. More than 400 benefactors are expected to gather for a night of fun including good music, food and a silent auction - all to support St. Joseph Services' programs that are "truly a lifeline to many in need," according to Bredemann.

"We're so thankful to the Bredemann family for all that they do to support St. Joseph Services as well as the greater community," said Heather Sattler, executive director of St. Joseph Services. "We're also very appreciative of the Chicago Automobile Trade Association's donation of $1,500 and to have the support of Chicagoland's new-car dealers."

The CATA created the Chicagoland Dealers Care program in 2008 to build upon the charitable efforts of CATA's dealer members. The CATA has been a longtime supporter of local non-profit organizations. Since its inception in 2008, the Chicagoland Dealers Care program has donated nearly $100,000 to local charitable organizations supported by new-car dealers. Additionally, since 1992, the association has raised nearly $48 million for significant Chicago-area charities during the annual First Look for Charity black-tie event, held the evening before the Chicago Auto Show opens to the public. 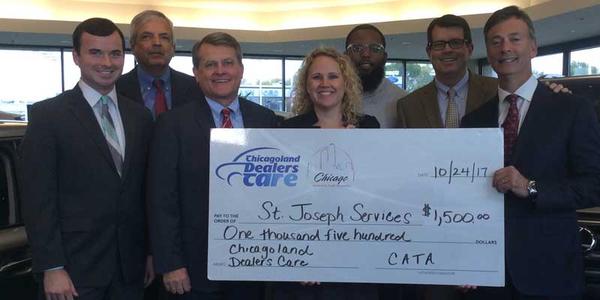