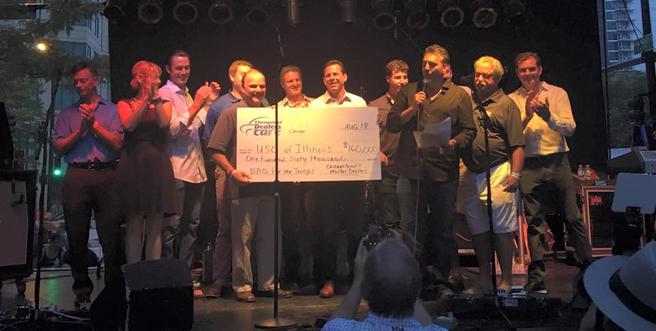 "This is the fourth year that the CATA has partnered with the USO of Illinois on the Barbecue for the Troops effort, and we're thrilled that this program continues to gain momentum," said CATA Chairman John Hennessy. "It doesn't come as a surprise. Dealers are deeply rooted within their communities and this cause truly resonates with everyone. Rallying their communities in support of the USO of Illinois is one way dealers can show gratitude for all that U.S. troops do to keep us safe each and every day."

Since the campaign's launch in 2013, Chicagoland's new-car dealers have raised more than $420,000 for the USO of Illinois, quite a feat for an initiative that started as a grassroots program where dealers would agree to set out a grill and a tin can. This past July, Chicagoans who visited their local new-car dealer's Barbecue for the Troops event found everything from patriotic ceremonies - including 21 gun salutes and the national anthem sung by American Idol stars - to giant inflatables for kids, to classic car shows, all to help draw interest and crowds to raise money for local troops.

"This year, as we celebrate 75 years of connecting our service members to family, home and country, the USO of Illinois is very grateful to the CATA for their continued leadership and generous support that enables us to stay connected with more than 330,000 military and military families every year," said USO of Illinois President and CEO Alison Ruble. "Thanks in part to the 100 local new-car dealers that have participated over the last four years, we are able to continue delivering programs and services to our service members that provide care and comfort and truly send an important message that the American people appreciate their service and sacrifices."

To help raise additional awareness for the dealership fundraisers, the CATA coordinated a #BBQ4Troops social media contest where one winner would be selected to receive the Ultimate Backyard Barbecue, a catered barbecue meal by Real Urban Barbecue for 50 friends and a special visit from Chicago Blackhawks great Tony Esposito. Rebecca Wilson from Oak Lawn was selected as the winner for her entry, which received 415 Facebook votes. She nominated her fiancé, a U.S. Army veteran, who will receive his Ultimate Backyard Barbecue later this summer.

The CATA and the USO of Illinois already have big plans for the fifth anniversary of the USO Barbecue for the Troops events, which will be held across Chicagoland on Sat., July 15, 2017.

For more information on the CATA, please visit www.cata.info or contact CATA Director of Public Relations and Social Media Jennifer Morand at jmorand@drivechicago.com. For more information on the USO of Illinois, please visit http://usoofillinois.org or contact USO of Illinois Vice President of Development Jessica Dolan at jdolan@usoofillinois.org.